Conventional wisdom has it that the spring and summer months are the “buying season” in real estate, but it’s helpful to see data that supports this claim. We took an in-depth look at Nashville’s real estate market over the last three years to see if there were any trends for a particular month. The factors we considered were the number of home sales per month, the average sales price per month, and average days on market. While most of the data support a general trend, there was one standout month, far removed from the “buying season.” Here’s what we found:

After looking at the data, the months of December, June, and May respectively achieved the highest average sales prices over the last 3 years. Conversely, January, February, and September had the lowest average sales prices throughout this period. While May and June performed as expected, December’s unexpected success was a bit of a surprise. It consistently ranked near the top and even topping the chart this past year.  It’s also worth noting that November has become a contender in the past 3 years, ranking 4th overall for average sales price.

The average days on market over the last 3 years is 28 days, and 2019’s average was not far off at 31 days. So, it’s safe to assume that the average home closing will happen within about one month from the time it is listed. This means that you want to list your home a month earlier than what the charts show.

What Months Do Homes Sell the Fastest? 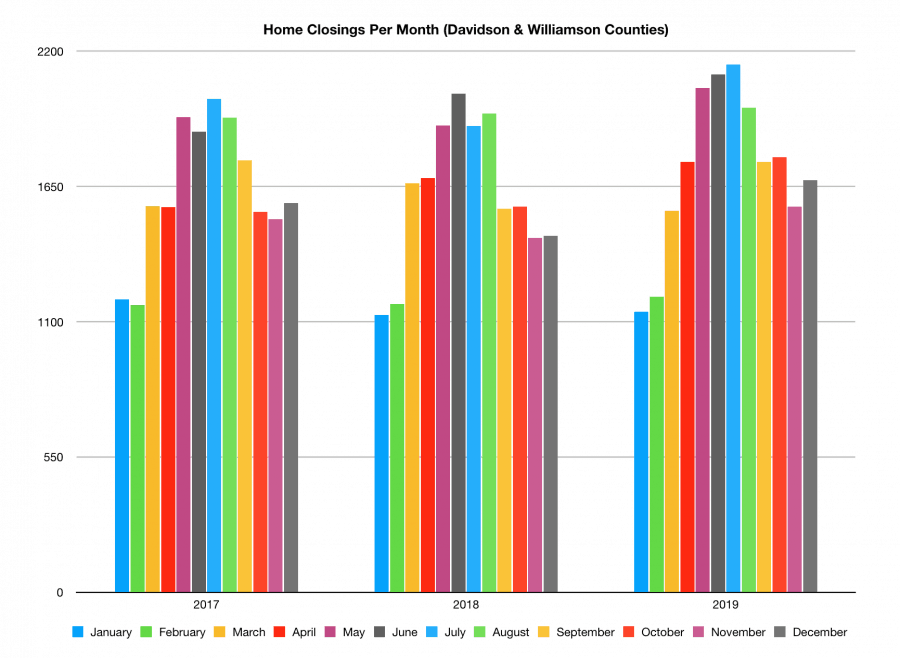 Next, I took a look at the number of closing per month in Davidson and Williamson Counties. Consistent with the trend of the previous 3 years, June and July topped the chart, but this time May replaced August as a close third. The months with the least amount of home sales were January and February, followed not too closely by November.

The months with the lowest average days on market were June, July, and August, with May right coming in at a close 4th. Homes sat on the market the longest in the months of February, January, and March.

June and July are clearly the top months where homes sell the fastest and third place is probably a toss-up between August and May. So once again, if you’re in a hurry to sell your home, you will want to list it a month prior to take advantage of these peak selling times.

When Are The Worst Months to Sell Your House?

February, January and March were our worst-performing months due to the decreased sales price averages and longer days on the market. Instead of listing your home to sell during this time, we suggest that these months are a great time for sellers to consider doing repairs to ready their homes for the upcoming selling season.

Ready to Find A Home in Nashville?

Get alerts for new properties that match your exact criteria as soon as they hit the market.